11 Artists to Help You Learn Spanish Through Music 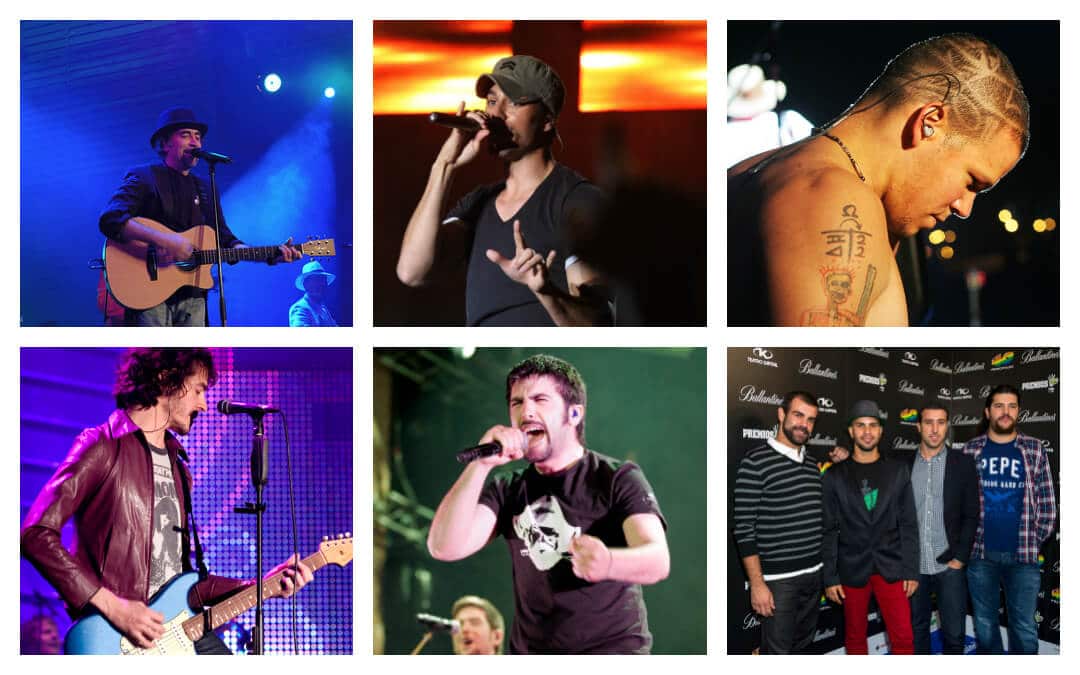 It is often said that, to learn the language of a country, you must immerse yourself in the culture of the country. One of the better and most useful ways to do this without living in the country itself is by listening to its music. So if you’re looking to improve your Spanish but are not able to plan a trip to Spain or Latin America, here are 11 groups and musicians who can help!

Born in Madrid in 1968, Alejandro Sanz knew he wanted to dedicate his life to music when he was only a teenager. This was definitely not an arbitrary choice, as he could already play the guitar at only seven years old and started composing songs soon after. At the age of 16, he released his first record but it passed unnoticed, so he started composing songs for others. At the age of 23 he released his first well-known album, “Viviendo deprisa” (1991), which sold over 1 million copies, suggesting that a larger audience was waiting for him. Today he has sold more than 23 million copies, 16 albums, and has the most Grammys of any Spanish artist. Despite becoming famous, he is still the composer and writer of all his songs, so he deserves a place on this list.

Joaquin Sabina stands out not for being a great singer, but instead for his lyrics, with his songs considered poetry rather than music. In fact, he started writing poetry when he was only 14 years old. Since music was also a big passion of his at that age, he formed a music group with some friends. In 1975 he had his first performance in London and performed as a support act for Paco Ibañez, Lluis Llach and more. He was also in charge of the soundtrack of the BBC TV show, “The Last Crusade”. Since 1980, the year his first song was released, he has not stopped playing and doing shows with other artists – in 2007 he went on tour with Joan Manuel Serrat. The last award he received is from the magazine, Rolling Stone which awarded him the Best Singer of the Year in 2010.

Born in 1964 in Barcelona, Sergio Dalma started his career very young and, at the age of 20, he had already performed as a singer as part of orchestras and choirs. After taking part in the TV contest, “Gent d’aquí”, he received an offer to record an album, which was released in 1989 with the name “Esa chica es mía” and was very successful. Due to this, he was chosen to represent Spain in the Eurovision Song Contest in 1991, and although he didn’t win, it made him very famous. The albums he released later appeared in the charts, competing with the likes of Alejandro Sanz and Enrique Iglesias.

Calle 13 was created in 2004 in Puerto Rico after René Pérez Joglar and his half-brother Eduardo Cabra Martínez had the idea of forming a music group. René is the singer and composer and Eduardo is the musician, music director and also composer. Their half-sister, Ileana Cabra Joglar, is the female voice of the group. The rap, reggaeton and hip-hop band is also known for their satirical lyrics which contain a social and political critique. So, if you like this music, this is the best group for you to improve your Spanish.

Probably the most well-known of these artists in English-speaking countries, Enrique Iglesias moved to Florida when he was only 7 years old and grew up there, making English his second language. Today, he records English versions of nearly every song he writes in Spanish. It was a big surprise to his family when, at the age of 20, he told them that he wanted to become a singer since he had never told them anything about it.  In this same year, his first album was released. It was a big success and sold over 6 million copies in the worldwide. In 1997, he did his first tour with over 80 concerts in 13 countries. Today, Enrique Iglesias is a very successful artist with more than 200 gold records and 100 platinum records and, as we can see, he has not yet given any sign of stopping this long trajectory.

Rubén Pozo Prats and José Miguel Conejo Torres “Leiva” created “Pereza” in the late 90’s, but it was not until 2001 when a record company saw their talent and offered them a contract to record their first album. Although this did not make them as famous as the previous artists we have mentioned, it was thanks to this very first album that they were given opportunity to do over 100 concerts all over Spain and to be the warm-up act for other famous artists. In 2002, their next album, “Algo para cantar”, gave them the push they needed, allowing them to do an extensive tour of over 200 concerts and making them the opening act for Bon Jovi on one occasion. From that point on, their career kept rising, but in 2011, they decided to put an end to the group. Both members both released their own album, although “Leiva’s” has been far more successful than Rubén’s.

This band was formed in 1993 when Carlos Tarque (voice) and Ricardo Ruipérez met and decided to get together to form a band, convincing the other current members to join them. In the beginning, the 5 musicians from Murcia (Spain) played a mix of blues, soul and hard rock, and were even told to sound like Led Zeppelin, Aerosmith and others. In 1995 and 1997 they released two albums, but none of them reached the sales they expected. Even so, it gave them the opportunity to play with big international artists like Bon Jovi and Gun. It wasn’t until 1999 when they finally made a big step in their career with the album “Usar y tirar”, which brought them the MTV award for best Latin group in the year 2000. In the same year, they released their most well-known song today, “Carolina”.

Juan Esteban Aristizábal Vásquez was born in the 70’s in Colombia. His family loved music and taught him how to play the guitar at an early age. That’s why, at the age of 15, he decided to create a band, which gained a lot of success, releasing five albums in eight years. The success of the group encouraged him to make the big step into starting a solo career when the band split up, recording his first album “Fíjate bien” in Los Angeles. It was a great success and got him 3 nominations at the Latin Grammys. Singing, writing, producing and playing the guitar all of his songs, Juanes’ career has only gone upwards, winning him a lot of awards like the MTV awards, Grammys, the Spanish “Premio Ondas” and more.

This duo was formed by two Spanish brothers from Cornellá (Barcelona). Born in the late 70’s, they didn’t complete their studies and started working in one of the factories of what today is SEAT. It was there, during the monotonous work in the factory, where the idea for their first song came. After playing in a few bars around their hometown, and seeing that the audience liked their music, they decided to record a song. The record company they sent it to liked their music style – a mix of rumba, flamenco and rock – and so the group were able to release their first album, “Estopa”, in 1999. After this, the number of sold records grew quickly, especially in the year 2000, when they received a lot of awards. Today, the group has still as much energy as when they began, especially since their last album, “Rumba a lo desconocido”, is from the year 2015 and they are still giving concerts.

This is a Mexican band, created in Guadalajara and initially called “The Spies of the Green Hat” in 1976 and later “Sombrero verde” (Green hat). Under the latter name, they released their first two records, but in 1987 they changed record company and also the name of the group to the current one, Maná, and which has since sold 50,000 records. The following year was not as good as the first, so they decided to change to Warner Music, and released “Falta amor” which sold over 750,000 copies. However, it was in 1991 when they really achieved fame all around the world with their album “¿Dónde jugarán los niños?” which sold over 1 million copies. Today Maná is one of the best known groups of Latin music in the world.

This group is a special choice of mine, since they come from the Canary Islands, where I also come from. The group had their first appearance in 2007 in a local music contest which they won by a landslide. Their first song was played on the radio stations of the Canary Islands and, during a concert, a producer from Barcelona liked their music and decided to represent the group. In 2010, they became famous throughout the country with their album, “Efecto Pasillo” and performed as support acts for other famous groups like “Hombre G”. In 2012, they published their most well-known song: “Pan y mantequilla”, which won the “40 principales” award for best song in 2012.

Of course, there are many more Spanish groups and musicians and this list represents only a small number. If you are looking for more music, here are some lists that you can check out. Enjoy learning Spanish!