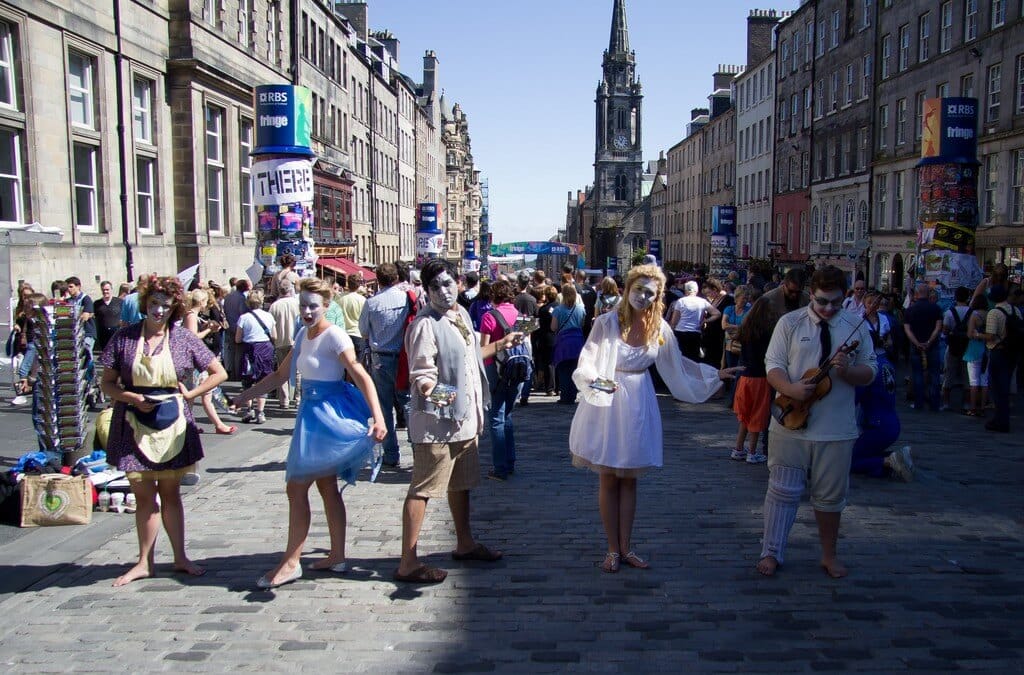 As the world’s leading festival city, Edinburgh has plenty to offer all year round. If you’re planning on visiting in the summertime, you can take advantage of longer days to appreciate the best of the city’s architecture, cafés, beaches and gardens. If you’re still thinking of things to do, check out our selection of 20 things to do in Edinburgh in summer 2016!

The Hidden Door Festival is back for its third year running! It will take place in last year’s venue, the Secret Courtyard which you can find hidden somewhere along King’s Stables Road. As always, the festival will showcase the best new work of Scotland’s artists, musicians, theatre companies, film makers and poets.

This event gets bigger and better every year! It’s a great festival with a relaxed atmosphere. Choose from a selection of music stages and performances or browse some of the food and merchandise stalls scattered around the meadows over this weekend.

This boutique festival takes place in Dumfries & Galloway and offers a fun selection of music, cinema, cabaret, comedy and workshops. Morcheeba is set to headline the event alongside a varied programme of local and international artists!

The Edinburgh International Film Festival is the world’s longest-running film festival and showcases a selection of critically acclaimed UK and international films from a wide range of diverse genres. The event takes place in various venues, including outdoor cinemas around Edinburgh.

This festival is back for another year to bring some of the most spectacular magicians and illusionists to Edinburgh. There will even be magic workshops if you feel like trying your hand at this mysterious art form!

For 10 days in July various venues across Edinburgh will present performances from some of the best jazz and blues artists from around the world. From samba to soul, there’s something to suit every musical taste!

This is the UK’s largest annual celebration of visual art and the good news is that it’s mostly free to attend! Last year’s festival included over 40 exhibitions taking place across Edinburgh’s galleries, museums and artist-run spaces.

Thanks to Edinburgh’s wonderfully diverse international community, it’s a great place to enjoy the Olympics. Watch along with the rest of the world in one of the city’s many pubs and dedicated sports bars, including Platform 5 which is just a 10 minute walk from our school!

This world-renowned performance combines music and dance, Massed Pipes and Drums, Massed Military Bands, cultural troupes, singers and the iconic Lone Piper with a spectacular display of lights and fireworks, all against the stunning backdrop of Edinburgh Castle. The show sells out every year so don’t forget to book in advance!

It’s the largest arts festival in the world and it takes place every year right here in Edinburgh. The city is completely transformed over 25 days in August with thousands of performance flocking to showcase their work in hundreds of venues around the city centre. A once in a lifetime experience!

Running parallel to the Festival Fringe, the Edinburgh International festival presents the finest music, theatre, opera and dance from some of the world’s most esteemed creators.

To celebrate the end of the Edinburgh International Festival each year, there is a spectacular display of fireworks made even more stunning against the backdrop of Edinburgh Castle.

The Edinburgh International Book Festival presents over 750 events involving everyone from brand new authors to to some of the most famous names in world literature. Previous participants included Al Gore, George R. R. Martin and J. K. Rowling!

This festival has been celebrating Edinburgh’s ethnic minorities for over 20 years and regularly attracts over 20,000 visitors with its extraordinary programme of theatre, dance, music and art.

Scotland’s biggest music festival attracts over 85,000 people every year and never fails to impress with its star-studded line up of contemporary and legendary artists. This year’s headliners include The Stone Roses, Calvin Harris and Red Hot Chili Peppers!

Go and see your favourite artist!

Ever seen your favourite band perform in a castle? If your favourite band happens to be Stereophonics, you’re in luck! They’re playing Edinburgh Castle for 2 dates in July. Or you could take a quick train journey to Glasgow to see Coldplay, The Offspring, Beyonce, Rihanna and many more perform over the summer season.

Go to the beach!

It’s not the first thing you would think of doing in Scotland but believe it or not, our beautiful country is home to some of the best beaches in the world. There’s even one in Edinburgh which is well worth visiting on a sunny summer afternoon!

You don’t have to wait for the Meadows festival to enjoy Edinburgh’s plentiful green spaces. During the summer, Princes Street gardens is packed with people from all over the world stopping to enjoy a well-earned rest from shopping and sightseeing while the Meadows will be filled with locals playing football or enjoying a picnic in this luscious green park.

One of the best things about living in Edinburgh is the easy access you have to the rest of Scotland. Take advantage of your weekend to explore the Highlands or visit another historical city like Stirling.

Whatever you choose to do, we hope you have a great time and don’t forget to share your experiences with us! 🙂