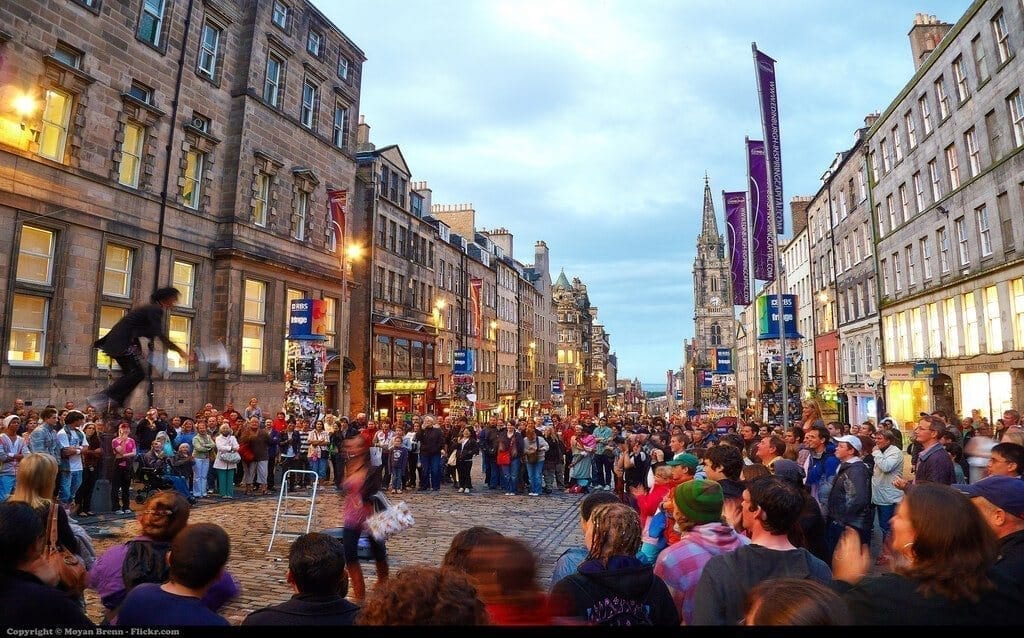 Edinburgh is the top festival city in the world and it’s easy to see why. There are festivals taking place all year round but the summer season is jam-packed with fun and interesting things to do and see. So, if you’re visiting at this time of year, make sure you take advantage of these top 10 summer festivals!

This multi-arts festival is currently in its fourth year and is completely run by volunteers. This year it aims to transform a derelict theatre into a creative hub by putting on 10 days of music, theatre, visual art, film and spoken word performances. It’s free to explore every day until 6pm when tickets a required for the evening events.

This is a perfect chance to meet local Edinburgers and international students alike as everyone comes out in force for this chilled-out, cheerful festival. It takes place in one of Edinburgh’s largest green spaces and showcases performances by musicians, comedians and other artists alongside rows of market stalls where you can buy everything from local farm produce to a second-hand piano.

Immerse yourself in film this summer at the world’s longest-running film festival! The Edinburgh International Film Festival takes place in various venues around Edinburgh and features critically acclaimed films of all genres from the UK and wound the world.

Sit back and be amazed by some of the world’s most spectacular magicians at the Edinburgh International Magic Festival. This year’s theme is “Levitations” so be prepared for some jaw-dropping illusions and stunning circus acts.

Edinburgh’s Jazz & Blues Festival is the biggest of it’s kind in Britain and is guaranteed to please music-lovers of all generations. Don’t miss Mardi Gras in the Grassmarket where many of the acts showcase their music for free in the open air!

This is the UK’s largest annual celebration of visual art and the good news is that it’s mostly free to attend! Last year’s festival showcased the work of 250 artists in over 40 venues around Edinburgh.

This world-renowned performance combines music and dance, Massed Pipes and Drums, Massed Military Bands, cultural troupes, singers and the iconic Lone Piper with a spectacular display of lights and fireworks, all against the stunning backdrop of Edinburgh Castle. The show sells out every year so don’t forget to book in advance!

It’s the largest arts festival in the world and it takes place every year right here in Edinburgh. The city is completely transformed over 25 days in August with thousands of performance flocking to showcase their work in hundreds of venues around the city centre. A once in a lifetime experience!

Running parallel to the Festival Fringe, the Edinburgh International festival presents the finest music, theatre, opera and dance from some of the world’s most esteemed creators. Don’t miss the spectacular fireworks display marking the end of the festival!

The Edinburgh International Book Festival presents over 750 events involving everyone from brand new authors to to some of the most famous names in world literature. Previous participants included Al Gore, George R. R. Martin and J. K. Rowling!

The Edinburgh Mela perfectly closes Edinburgh’s summer festival season with a celebration of Edinburgh’s ethnic minorities. It regularly attracts over 20,000 visitors and features an extraordinary programme of theatre, dance, music and art.