[Videos] 16 French singers/bands to practice your French with music! 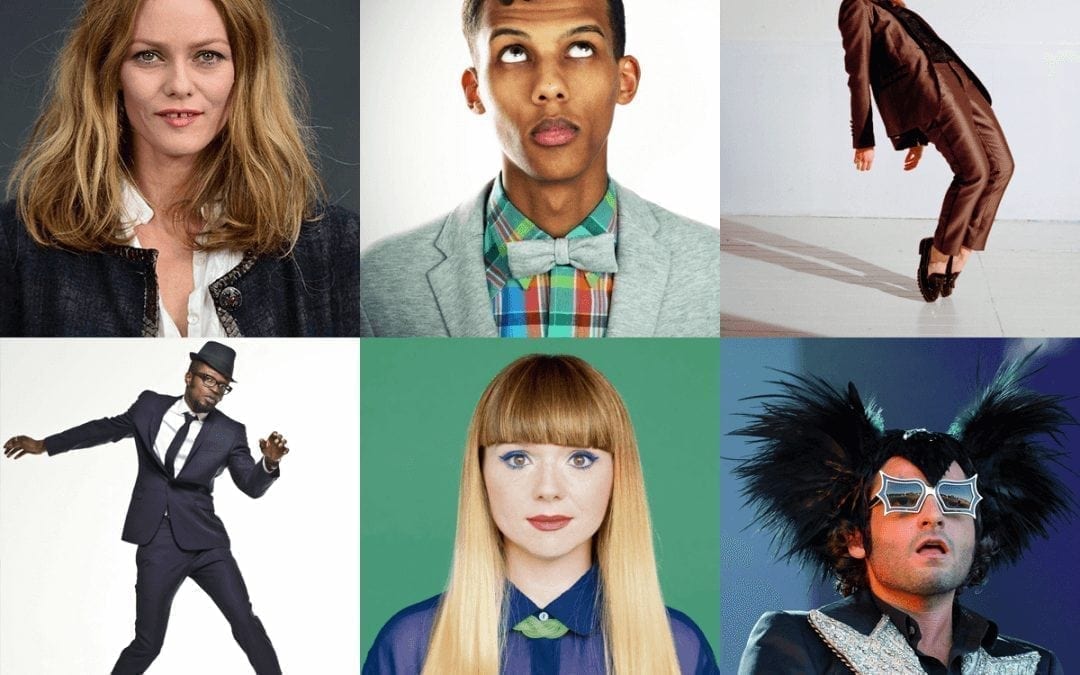 As a Frenchman coming to Edinburgh to practice and improve my English skills, I know that it’s important to immerse yourself in order to progress quickly in the language. It’s also difficult to have a real feel for the culture of your target language when you don’t really know where to look on the web. I made a selection of 16 French singers/bands that the French really like and listen to. It will be a perfect exercise to practice your French and discover our culture.

Wear your best headphones, pump up the volume and enjoy!

Having only auditioned for the eighth and final season of French talent contest, Nouvelle Star as a bet, eccentric chanteuse Luce Brenet, now known simply by her first name, might not have taken the show as seriously as the other contestants, but her eccentric fashion sense showed a disregard for convention, and her distinctive vocal style charmed audiences enough to eventually crown her an unlikely winner.

Born in the Languedoc-Roussillon area of Perpignan in 1990, her performing background was limited to a few flute recitals and amateur dramatic productions while growing up. At the time of her audition, she was preparing to attend a nursing college in Montpellier. However, her career ambitions changed when the judges, impressed by her rendition of Soft Cell’s “Tainted Love”, put her through to the live stages. Despite never singing in public before, she sailed through to the final thanks to unique interpretations.

2. Christine and The Queens

France’s Christine and the Queens is the electronic pop solo project of singer, songwriter and dancer Heloise Letissier. Born in Nantes, France in 1988, Letissier studied theater at Ecole Normale Superieure de Lyon before embarking on a music career. Inspired by the drag queens who danced with her while she performed, Heloise eventually adopted the Christine and the Queens moniker.

R&B chanteuse Shy’m vaulted to overnight success in 2006 when her debut LP, Mes Fantaisies, entered the French Top Ten. Born Tamara Marthe in Trappes on November 28, 1985, she began singing and dancing lessons as a child. After graduating at 17, she cut her first demo session and traveled to Paris, eventually befriending rapper K-Maro, who tapped her to guest on “histoire de Luv”, a single from his 2005 sophomore LP, Million Dollar Boy. Adopting the alias Shy’m – a moniker drawn from her reserved manner combined with her father’s Martinique heritage – she completed her debut, Mes Fantaisies, in 2006, scoring a pair of Top Five singles.

Combining influences as diverse as Jacques Brel, Cuban son, Congolese music, house, and hip-hop into danceable songs with thought-provoking lyrics, Stromae is a Belgian vocalist, songwriter, and producer. Known for his clean-cut look and trademark bow tie, Born Paul van Haver in Brussels on March 12, 1985 to a Belgium mother and Rwandan father, Van Haver was raised by his mother and developped an interest in music at an early age. When he was 11, Paul became a student at l’Academie Musicale de Jette, and started playing the drums.

Serge Gainsbourg was the dirty old man of popular music; a French singer/songwriter and notorious provocateur for his voracious appetite for alcohol, cigarettes and women, his scandalous, taboo-shattering output made him a legend in Europe but only a cult figure in America, where is lone hit “Je t’Aime… Moi Non Plus” stalled on the pop charts at number 69.

French singer and model Vanessa Paradis first hit the charts in 1987 at the tender age of 14. Her single “Joe le Taxi’ spent 11 weeks at the top of the French charts, amd proved an international success as well. She recorded two albums in Paris before travelling to New York in 1992 to record her self-titles English-language debut, with one-time boyfriend Lenny Kravitz as producer.

Zazie was one in a long line of French models and actresses-turned-pop-stars rocketing to overnight success with her 1993 debut single, “sucre sale”. Born Isabelle de Truchis de Varennes in Boulogne-Billancourt on April 18, 1964, she grew up enamoured with French icons like Georges Brassens, Jacques Brel and Barbara and, at the age of ten, she began studying violin, soon adding piano and guitar to her curriculum. As a teen Zazie also began writing her own songs and continued working on original material while studying psychotherapy.

After graduation, she launched a career as a professional model, becoming a familiar face in French fashion spreads and adverts over the decade to follow.

Julien Dore is a French singer/songwriter released his first solo album in 2008, which was among the best-selling French albums of the year. Born July 7, 1982, in Ales, Gard, France, Dore studied at the college of Louis Feuillade as well as the Ecole des Beaux-Arts of Nimes, where he performed with the band Dig Up Elvis.

French singer/songwriter Renan Luce was born in Paris in 1980. He spent his childhood and teenage years in Bretagne, learning to play piano, the saxophone and the guitar, and writing his first couple of songs. He moved to Paris in the early 2000s and began playing regularly, eventually catching the attention of Universal Publishing’s Olivier Lefevre. He quickly obtained a regular opening act opportunity with Benabar, whose song writing acumen was actually lyrically quite similar.

-M- was the alias of French pop enigma Mathieu Chedid, an uncommonly idiosyncratic and far-ranging talent best known on North American shores for his contributions to the animated cult favourite Les Triplettes de Belleville. Born on 21st December 1971, in Boulogne-Billancourt, Chedid was the son of the French pop icon Louis Chedid and the grandson of renowned poet and novelist, Andree Chedid. As a teen, Chedid collaborated with fellow pop icons, Pierre Souchon and Julien Voulzy (children of the legendary song writing duo Alain Souchon and Laurent Voulzy) in a series of short-lived groups like les Bebes Fous and Les Poissons Rouges.

Tété is a Paris based acoustic pop poet who sold 500.000 records over the course of a 15 year career between France, Japan, USA and Australia. His most acclaimed songs, “A La Faveur De L’Automne” and “Fils De Cham”, has, over time, turned into airplay classics. Having been nominated 3 times at French Victoires de la Musique and headlining 6000 seats Paris Zenith twice or Olympia hall 7 times in a row isn’t enough either. The man is now looking to new horizons with a mini-album in English. Some may refer to him as a pop version of Ben Harper, Tété remains Tété with his unique blend of strong melodic, blues tainted quirky pop songs with refined lyrics cut out for stage performances.

Mickey 3D are an award-winning French alternative rock band who made their major-label debut in 2000 and grew increasingly popular over the course of the decade. Founded in 1996 in Saint-Etienne, Rhone-Alpes, the band is comprised of singer/songwriter Mickael Furnon (guitar), Aurelien Joanin (drums), and Najah el Mahmoud (keyboards). During the late ’90 Mickey 3D released a few demo tapes before the band was signed to a recording contract with the independent label Premier Disque and made its label debut with album Mistigri Torture.

A throwback to the flower power era, ’60s revivalists Brigitte are a French female duo combining lounge-pop, retro-folk, and French cabaret to produce an authentic hippie-chic sound. Named in honor several of the decade’s icons (Bardot, Fontaine, Lahaie), Aurelie Maggiori, who had previously recorded under the name of Mayane Delem, and Sylvie Hoarau, formerly the lead vocalist in Parisian rock band Vendetta, formed their duo in 2008.

Born in Bergerac, France in 1996, Kendji Girac is a passionate singer known for his gender-bending mix of Latin-infused pop, dance music, and contemporary flamenco.

A member of the groups 3e Prototype and Sexion d’Assaut, and also a solo artist as well, French rapper, and producer Maitre Gims (born Gandhi Djuna) originates from the Congo but moved to France with his family at the age of two. The MC grew up surrounded by music; he’s the son of vocalist Djuna Djanana. His first solo single was released in 2006, yet several years passed before he was able to concentrate on his own work. In May 2013, he released his first solo album.

Black M (short for Black Mesrimes) is the stage name of Alpha Diallo, a French-Guinean rapper who first became known as a member of successful French hip-hop collective Sexion d’Assaut, which he joined in 2004. Diallo’s colorful personality and tongue-twisting rhyme style, often involving onomatopoeia and humorous wordplay, made him one of the mode celebrated members of the group.

Pop and R&B singer M. Pokora first rose of the fame with the boys band Linkup before going solo in 2004 for his self-titled debut, Matt Pokora. He could be described as the French Justin Timberlake – with the same boy-band roots and a similar penchant for fancy hats.